Lady Gaga brings her fans to Super Bowl LI with the Pepsi Halftime Fanifesto Contest, plus a couple of other sweeps

I had questioned in my first post about Super Bowl LI what NFC team was going to make it to play against the New England Patriots. That question was answered this past weekend with a dominate win by the Atlanta Falcons against the Green bay Packers. The Pittsburgh Steelers didn’t give us much of a game either against the Patriots. So now as the Big Game in Houston on Feb. 5 approaches there are still promos out there with a way to win tickets. 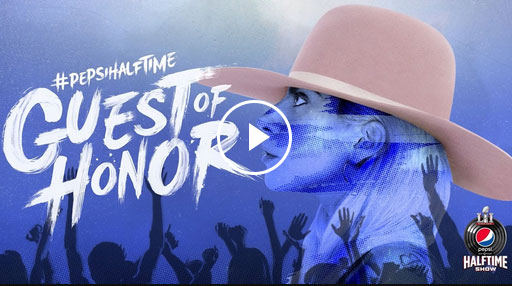 Lady Gaga is headlining this year’s Super Bowl Halftime Show. She and Pepsi have teamed up to offer the Pepsi Halftime Fan-ifesto with Lady Gaga, a special contest for her fans. Lady Gaga has offered to bring along a few special fans as her personal guests at the Halftime Show. As she said, “…because it’s not just going to be my moment — it’s going to be our moment.” This video showcases some of the winners. To find out how to be one of Lady Gaga’s lucky guests, read more here.

Yellow Tail, an Australian wine brand, will be an advertiser during this year’s Super Bowl broadcast. They are currently running their Yellow Tail Guy Sweepstakes which isn’t offering a trip to the Super Bowl, but instead one lucky Grand Prize winner will receive a trip for two to Sydney. To enter participants must find the Yellow Tail Guy online, on screen or in person and post on Twitter or on Instagram that may include a screenshot/photo/video indicating that they “found the Yellow Tail Guy” and use the hashtags #yellowtailguy and #Sweepstakes. Five First Prize winners will also each receive one TV, issued in the form of a $750 gift card.

Wanna win a trip for 2 to Australia? Share this post using #yellowtailguy and #sweepstakes to enter. ? Rules in bio. pic.twitter.com/XQaVQIzS7a

This sweepstakes from Igloo is still open for a chance to win tickets to this year’s Super Bowl Game. But it ends tomorrow, Jan. 26. Their Big Game Giveaway has a prize package that is pretty sweet. It includes two tickets to the game, 3-night hotel accommodations, airfare & ground transportation. $1,000 worth of Igloo® products, a Houston guided ORU kayak tour, a private Houston helicopter tour, dinner for two at Houston restaurant with acclaimed chef and a $500 Gift card from Academy Sports and Outdoors. To gain an entry participants just need to fill out and submit the entry form. However, they can also gain up to 24 additional entries by completing other tasks such as following some of the sweeps partners on social media.

The Patriots are now advancing to their ninth Super Bowl in franchise history, a total that is the most in the NFL. This will be the Falcons second time in the Super Bowl. In their first-ever Super Bowl appearance, they lost 34–19 to the defending champion Denver Broncos in Super Bowl XXXIII. The road to Super Bowl LI now continues, but we have to wait a little while to see who will take home the trophy. Let’s just hope its a good game. Stay tuned for more on Super Bowl LI next week.