For about the past five years we’ve been working with REACH, an experiential marketing and event management agency. Over the last year they have come to us for assistance for several promotions for their client, Toyota Motor North America, that are tied to Toyota’s sponsorship of the Rock ‘N Roll Marathon Series. We’ve been working with REACH on a new promotion that just launched last week called the Toyota What’s Your Sign Contest which will now be running till the late November. 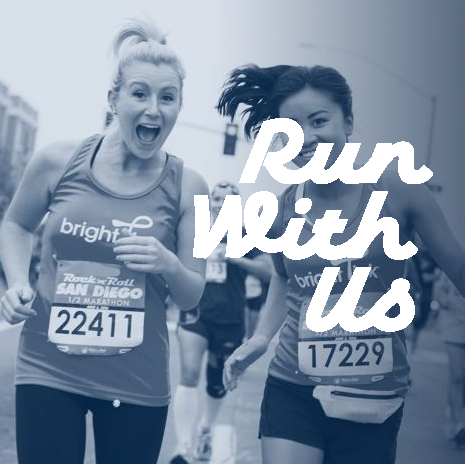 Toyota became the official vehicle sponsor of the Rock ’N’ Roll Marathon Series back in 2015, and is one of several sponsors. The Rock ‘n’ Roll Marathon Series has made running over 20 years now. The Series infuses each event with live bands, cheer teams and more. For 2018 the Series organizers, IRONMAN, are now promising to bring more music, better runner support, improved technology, and more community engagement to every event. 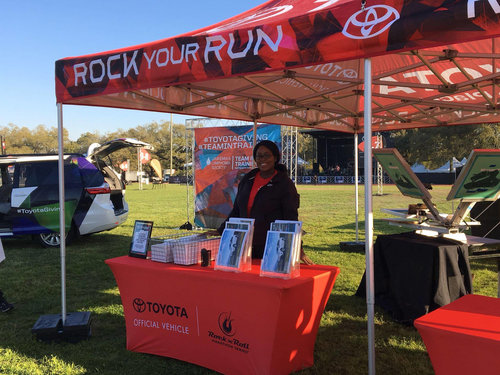 This year Toyota is continuing with their ROCK YOUR RUN theme. Runners and their supporters can find Toyota’s footprint at each event including at the finish line. During each festival in the 19 cities throughout the U.S., Toyota will have various vehicles on display and will offer fun games and also give out complimentary gifts. This new Contest was launched to coincide with the 2018 Humana Rock ‘n’ Roll Chicago race which was held this past weekend. The next event will take place in Dublin, Ireland, and then it comes back to the states on September 1st in Virginia Beach.

The Toyota What’s Your Sign Contest invites people to show off their best sign – motivational, inspirational or just plain funny. They are directed to the online contest page where they need to fill out the required fields on the entry form and upload a photo of their sign. The contest page includes photos of three different signs to help depict what the message photo should contain. 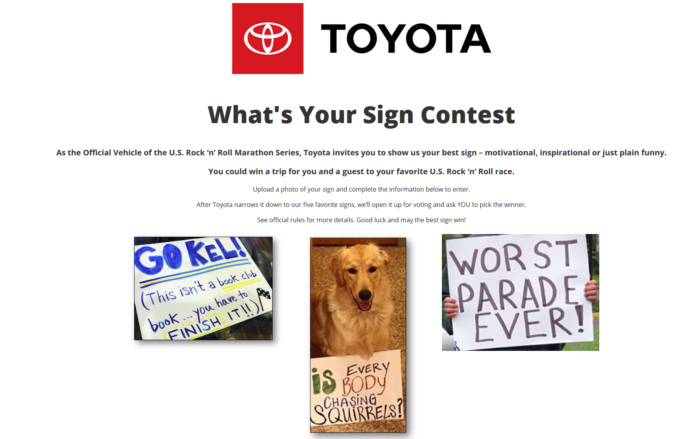 The one Grand Prize winner will receive a trip for themselves and a guest to attend an upcoming U.S. Rock ‘n’ Roll race that is scheduled to take place on or before November 30, 2019. The prize package includes the round-trip airfare for two to the race city, hotel accommodations for two nights and a $250 BROOKS gift certificate which is valued at $2,700.

The Contest submission period is open till November 12, 2018. Once that period has ended a panel of judges will review all eligible photos that were submitted and will choose five finalists based on the following judging criteria: 30% inspiration, 35% design, 35% originality and creativity. The photos from the five finalists will then be showcased in an online photo gallery and people will be invited to visit the gallery and vote for the photo they believe is the best. The voting period will be open from November 15 – 25. The photo that receives the most votes will be deemed the Grand Prize winner.

For this Contest we are again utilizing the Shortstack application in which we have built the entry form and are collecting all the entrant’s data along with their photos. I have given the REACH team direct access to the campaign as well as a separate, private, online page that was created so that they could view all the photos that are submitted in real time. Once it is time to judge all the photos, REACH will be able to share this page with the judges so they can chose the five finalists. At that time we will then update the photo gallery to display only the five finalists, add the voting capability and open it up for all  to view and vote. One vote per day, per person will be allowed.

All of Shortstack’s entry pages are mobile friendly from the start with Shortstack’s “One Campaign for any screen” design philosophy. Each campaign created is assigned a URL address which can be customized by adding text to the beginning of the address, but keeping the characters that where originally assigned. In this case Toyota wanted a fully customized URL address so we purchased www.Toyotawhatsyoursign.com and am hosting the page. We took the embed code from the Shortstack campaign and added that to the new online page. If you would like more details on how to set up a promotion utilizing the Shortstack platform, please feel free to contact me. It’s a great tool and it also includes a great team of support people.

Hilary Van Messel, Producer at REACH stated “Similar to previous contests, this Contest goal is to develop a following and spark action in the Rock ’N’ Roll Marathon community. Differently, this Contest runs for an extended period of time, so we’re promoting it in fun and different ways, including a cyclist in each of the cities who passes out little business cards that explain the Contest to the supporters on the sidelines of the race courses. We hope that people get excited to enter, whether that is through our promo work or the trip for two Grand Prize.” Currently there have been a few photos submitted to the Contest. The Contest is also being promoted on various online social channels as well as it will be featured throughout the year on the official Rock ‘N Roll Marathon Facebook page.