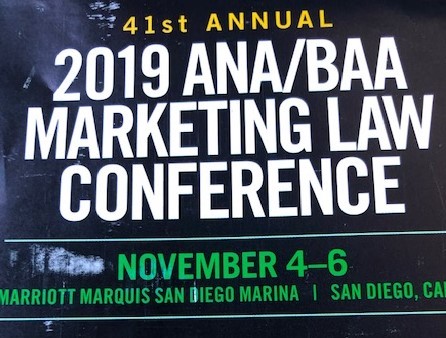 The 41th Annual Marketing Law Conference was held in San Diego last week hosted by the ANA (Association of National Advertisers). It normally has been held in Chicago in November each year but was moved to sunny, warm San Diego, which I was lucky enough to attend. I’ve been an attendee of this conference now for over 20 years, but I had not been to San Diego for some time. This ANA acquired the BAA (Brand Activation Association) back in 2014, which the Association had changed it’s previous name from PMA (Promotional Marketing Association). So I go back to the days when it was the PMA (who I first started blogging for) and I saw many new faces at this year’s conference, especially since it was held on the West Coast. Most of the sponsors, many from New York law firms, still remained the same. Each year they say that they broke attendance records and this one was no exception with what I was told was 856 attendees.

This year’s conference was titled “GET SMART: LEGAL COMPLIANCE” and featured another full agenda with more than 165 speakers, 65 sessions, and 15 roundtables. Day one of the Conference kicked off at the Marriott Marquis San Diego Marina at 9:15 am on November 4 with the first breakout sessions. I attended the first breakout session which was titled “Basics of Promotion, Sweepstakes, Contest and Gaming” since that is a what my business is mostly focused on. The speaker was Jason Mueller from Sheppard Mullin Richter & Hampton, LLP who is a partner with the firm’s Dallas office. It was good to hear him speak about some of the many details of sweepstakes and contest that I pass along to our clients. One question I asked him was if he knew if entering a sweepstakes through text messaging still required an alternative method of entry since data plans could be consideration. He answered that in his opinion, no, and that there has never been a challenge to not including one. 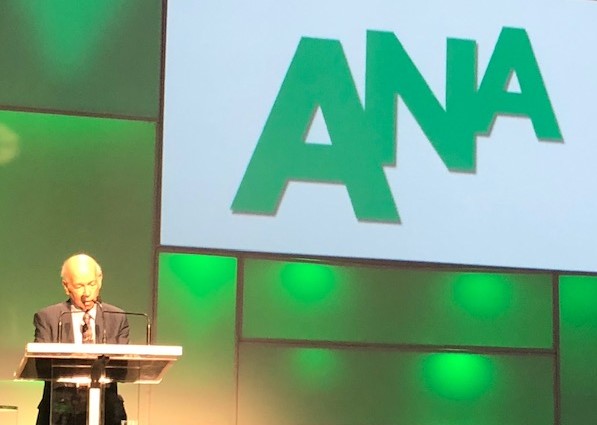 On Day 2,Tuesday, the Breakfast Round Tables were held which I always like to attend to have a chance to ask questions in a smaller group. I chose the “Practical Answers to Sweepstakes, Contests and Social Media Questions” which was led by Larry Berney, COO and General Counsel for Don Jagoda Associates. Larry had a great hand-out for the group that included some of the many Q&A’s that I regularly are asked by clients.

After breakfast Ed Kaback, SVP/LAW of ANA who has been the legal member of the association since the PMA days, greeted us with his welcome and introduction of the co-chairs of the event. Bob Liodice, CEO of ANA, followed with his opening remarks in which he stated

“We are all connected through growth no matter what business we are in. We all must drive growth to compete in today’s landscape”. He then shared with us a new campaign that the ANA is championing called #SeeHer. SeeHer’s mission is to eliminate gender bias in advertising and media, so that women and girls will see themselves accurately reflected in content. It’s goal is to increase the percentage of accurate portrayals of women and girls in U.S. advertising and media by 20% by 2020. 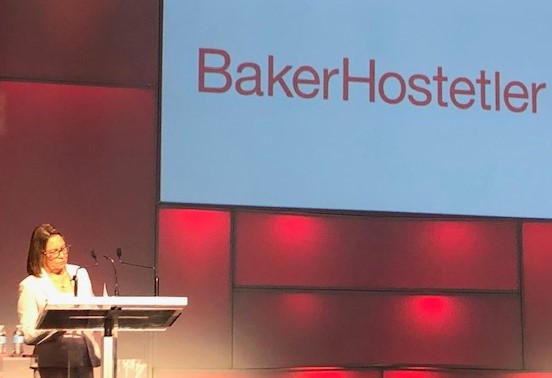 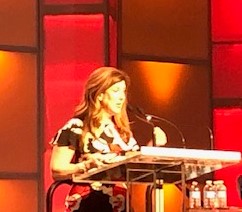 at BakerHostetler in New York again delivered their annual industry review to start of the general sessions on Day 2. Their presentation was titled “A Year in Review, Sweepstakes, Contests, Privacy, Digital and Social Media”. Linda opened up stating that there were no new major platform or regulatory changes in the industry this past year. She did state that it appears that brands are looking to keep consumers engaged as long as possible and that means that more time and effort is required by the consumers to gain an entry into a sweepstakes or contest. There has never been an enforcement for a time consideration, so it’s very low risk. However she recommends brands should stay away from asking for a unique consideration such as the “What would you do for a Klondike Bar?” promotion that encouraged consumers to wipe out their social media account.

This year the video part of their presentation focused mostly on Influencers. It involved a YouTube channel called Cool Times which was started by of couple that originally met through an online dating app. They decided to start posting funny videos that covered many different topics. Their relationship grew deeper and the guy surprised the girl with a proposal during one of their video recordings. They started planning their wedding and many bridal related companies were offering them free products and services in return for their promotion. They ultimately got married and became huge Influencers that people loved because of their authenticity. But we then find out that the girl actually was hired by Trilogy Marketing, a company that connects brands with Influencers, and she was in on the whole scam to connect her with her now husband/partner. He was never aware of it till he found a letter on her desk from the FTC staring that they were non-compliant with their endorsement guidelines and with COPPA regulations. So that was the end of Cool Times. We never found out if they stayed married, but we did find out that the whole story was fictitious! 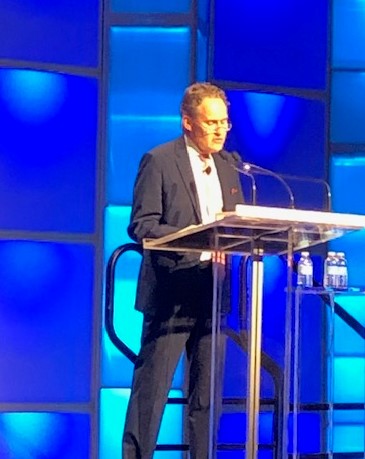 Ron Urbach, Chairman & Co-Chair of Advertising, Marketing & Promotions Practice Davis & Gilbert LLP, was back later that morning with another highly entertaining presentation titled “The Upside Down World of Advertising and Marketing Law – Where the Past & Future Disrupt the Now”.  Ron started off stating that “Today, everyone can have their own reality show online. These new reality TV stars are today’s Influencers”. It is now a $6.5 billion market and estimated to grow to $15 billion by 2022. However, brands and Influencers are both at risk with the FTC getting highly involved and making sure that there is no “quid pro quo”.

Ron’s video presentation featured a game show called “Axed”, Managing Risk in an Insecure World. The game included three contestants that were competing to be hired as the General Legal Counsel to help launch a new car brand that is run by compressed air. There were also three judges who were sitting in a “Voice” like chair with their backs to the applicants. The contestants had to perform different tasks such as singing a popular song with different lyrics that related back to the new CPPA and GDPR data privacy laws. Tim was the first contestant to get axed out which left two women. They had to prove how far they would go for a client by eating out of a “can of worms”. One of the women won the job, but the other was then offered a position in “Paradise”, a play off of the Bachelor in Paradise TV Show.

Ron highlighted the issues the industry is facing with the new privacy laws and regulations. The GDPR in Europe is now a year old and there has been many issues and problems leading many to house cleaning. In the U.S. state law discrepancies will continue to exist until there is a federal law. Nevada’s new privacy law offers online business a different way for consumers to opt-out. Facebook’s settlement was a $5 billion penalty, the largest ever imposed on any company for violating consumers’ privacy. The Equifax settlement affected 147 million people. The TikTok platform through a COPPA settlement issued a $5.7 million fine. The FTC & NY fined YouTube for not disclosing kids’ content they collected. Ron noted that with 5G coming soon, there will be even greater issue and navigating the privacy maze will be difficult.

It was another very informative conference and I had the chance to meet some new people, many from California. So thanks to all who put on another great conference. Next year it will be back in Chicago, Nov.11 -13, 2020, at the Chicago Marriott Downtown Magnificent Mile. Not the warm, sunny San Diego we experienced this year, but at least I’ll have a chance to visit my daughter who lives just NW of the city.

We use cookies to understand how you use our site and to improve your experience. By proceeding, you accept the use of cookies.Ok, I agreeTell me more