Pet Costume Contests are the buzz this Halloween 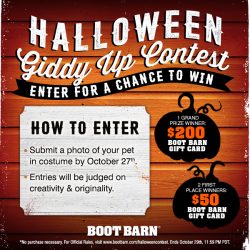 We’ve been seeing quite a variety of Halloween contests and sweepstakes running this year. Pet costume contests are especially popular and we’ve been helping one of our clients with one.

The folks at Boot Barn, America’s largest Western and Work Wear store, is running the Halloween Giddy Up Contest. Folks are invited to submit a photo of their pet in a costume by tomorrow, October 27th. Their entries will be judged on creativity and originality of the photo they submitted. A grand prize winner will receive a $200 Boot Barn Gift Card and two first place winners will each receive a $50 Boot Barn Gift Card. 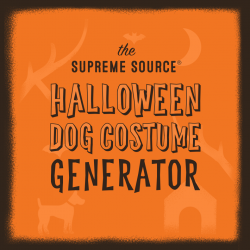 In case you’re not sure how to dress up your pet, the team at ShortStack sent us a copy of this fun Halloween promotion that was done for a company called Supreme Source which is running on their Facebook page. Shortstack is the platform that we use to create entry pages on Facebook and online for some of our client’s sweepstakes and contests.

Supreme Source created the Halloween Dog Costume Generator that helps doggie parents choose a Halloween costume for their pups. Once the costume suggestion is revealed, the campaign allows users to share their results on Facebook with their friends and gives users a link to some fun and easy do-it-yourself dog costumes. Plus, when you take the quiz you’re entered in a drawing to win one of three Supreme Source® Prize Pack!

Here’s some interesting news that I just received from Talkwalker, an international social media analytics firm. When it comes to Halloween costumes this year, Talkwalker is reporting that social media is telling us that Donald Trump (9,006 mentions in the past 30 days) is the winner over Hillary Clinton (5,297).

However, the costumes generating the most buzz over the past 30 days are robbery victim Kim Kardashian (11,488 mentions), red sweater debate superstar Ken Bone (6,973) and the Joker’s sidekick, Supervillian Harley Quinn (5,644). During that same period in 2015, the top costumes included Batman (2,835 mentions), Donald Trump (1,773) with Hillary Clinton not even appearing in the top 25 mentions.

So whatever you and your pet decide to dress up for this Halloween, I wish you a fun holiday!