It is December, the last month of the year, and the holiday season is now in full swing. So for this month I’ll be writing here about holiday promotions that we’re working on as well as others that are of interest. 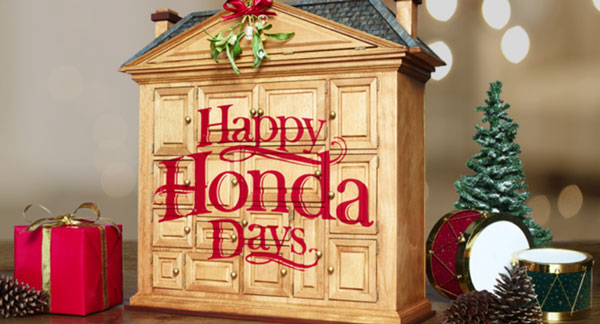 This promotion caught my attention just yesterday. Honda has always been known to run promotions that feature new and cutting edge technology. For their “Happy Honda Days” end-of-year marketing they are using Twitter’s new Instant Win feature. The Honda “Open The Cheer” Instant Win Game and Sweepstakes offers instant win prizes for retweets, which are Amazon gift cards and Apple Watches, with a grand prize drawing for a 2016 Honda Accord.

Participants can receive a gameplay into the Instant Win Game and a Sweepstakes entry into the drawing each day during the promotion period, which runs till December 29, by retweeting a Tweet sent by Honda. I retweeted their daily Tweet just now and immediately received a reply back that I didn’t win now, but I’m entered into the drawing to win the Honda Accord.

This #OpentheCheer program kicked off with a tweet on their Twitter page that included this cool video that encouraged people to retweet for a chance to instantly win a gift.

RT for a shot at a car, gadget or gift card AND we’ll give $1 to @PBTF! #OpenTheCheer Rules:https://t.co/T6O2RXBZtZ https://t.co/PcACUTs40t

For every retweet, Honda will give $1 to the Pediatric Brain Tumor Foundation. “Our goal for this campaign is to tap into the anticipation of giving and opening gifts during the holidays and Twitter’s Instant Win feature allows us to surprise our fans while helping to find a cure for children’s brain tumors,” said Susie Rossick, assistant VP at American Honda, in a statement.

The campaign was created by RPA and includes video elements from Brand New School and Instagram artist Jessie Bearden. I’m looking forward to seeing more of Twitter’s new Instant Win feature and hope I’ll be able to be involved with it soon.