Tips and best practices for running Facebook Sweepstakes and Contests

Now that Facebook has evolved more into an advertising platform for brands this means that the reasons for running a contest or sweepstakes promotion on Facebook have also changed. Businesses can’t reach their “fans” as easy or “free” as they used to. So a question being asked now is, do these types of promotions still work on Facebook? Yes, they can if you clearly define what you want to get out of them.

When brands first started out building their Facebook pages their main objective was to acquire fans. They wanted a way to drive people to their page and Like it to become a fan. I would tell clients that if they wanted to just grow their fans, along with their database, sweepstakes were the way to go. You could create a simple sweepstakes offer with a Like-gate attached to it so that visitors to your page would have to Like it first in order to access the entry form. So this was a great way to build up a fan base.

Once you had a fairly good number of Facebook fans, the next step was to post engaging and interesting content on a regular basis so that your brand posts would appear in all your fans news feeds. Well that has changed now that Facebook states that your posts will only reach a very tiny percentage of your fans. So what good is it to have all these fans? That has been a big topic of discussion with some brands stating they’re now going to stop using Facebook all together.

Today, if you want to use Facebook promotions, you first should decide what type of Facebook promotion will work for you. With a sweepstakes people are filing out an entry form, which means you can build up your database with their names, email addresses, and other information that you requested. This will allow you to send the participants emails when you have new product or promotional information to share.

Keep in mind that now more people are accessing their Facebook account from a mobile device vs a computer, so it may not be a good idea to use a Like-Gate anymore. When you require someone to Like the page to enter, they must first sign into Facebook from their mobile device so that the application knows if they are or are not a fan already. This adds an extra step and may deter some from entering altogether. 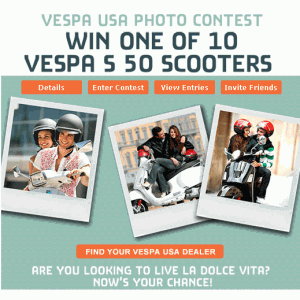 A contest,  vs. a sweepstakes, may be the best choice for you since contests are a great way to create buzz and increase engagement from fans and key customers while building brand awareness. The most popular type of contests today require some type of user-generated content to be submitted such as a photo, video, essay, recipe, or design. Submissions are then judged or evaluated based on the contest theme and judging criteria and in some cases open for public voting. If you run a contest that invites participants to submit a photo or video you increase the chances that they will share their submission with their friends and family on Facebook.

With a contest you most likely will receive fewer entries then from just a random-draw sweepstakes since you are asking people to do some work. However, if your goal is to reinforce a brand or attributes of a product or service, contests are the better tactic since the content submitted usually includes your brand. It also encourages others to share and help spread the word for you.

Either way if you decide to run a sweepstakes or a contest on Facebook you should follow these best practices:

#1. Include a relevant prize. The best prizes help to showcase your own products or services which should be relevant to your audience. While iPads are still popular prizes, they don’t relate to most brands and they tend to get overlooked because they are too common. Make sure the prize is relevant to the amount of effort you’re asking of participants.  A $100 value prize may be fine for a simple sweepstakes entry, but not if you’re asking someone to create a video submission. Keep in mind that our Federal government requires that anyone who receives a prize valued at $600 or more must receive a 1099 form and claim it when they file their taxes.

#2. Keep it simple.  Don’t ask for more information then you need on the entry form.  Include a “Login with Facebook” button that automatically fills in the name field for the user. This speeds up the registration process and helps to eliminate duplicate entries. When asking for contest submissions, keep in mind the technical level of your audience. It’s much easier to upload a photo of yourself that to create a video.

#3. Follow Facebook Promotion Guidelines. Facebook updated their guidelines last year to allow business pages to run promotions on their page vs. an application. However,  you still can not administer a promotion on a personal Timeline. This means that you can’t collect entries, including additional entries, for having users post on a personal page. You will be in violation of the Facebook policy if you encourage sharing to gain entries. Also,  Facebook has always insisted on clearly stating that Facebook is not sponsoring the promotion. The best way to do this is to include it in your official rules.

#4. Post Official Rules. Any contest or sweepstakes promotion that’s launched on Facebook must include a set of written rules specific to that promotion. Besides the Facebook promotion guidelines you need to have your own rules that basically is a contract between you, the Sponsor, and the general public. These can be especially useful for example in a contest that allows public voting when fraudulent votes are suspected, or when a winner questions what is and is not included in the prize they have won.  Utilizing a company like ours that specializes in sweepstakes and contest administration to draft your rules so that they are compliant within all the U.S. states is recommended.

#5. Don’t forget to promote your promotion.  You can plan and launch the best promotion in the history of your company, but if you don’t get the word out about it, then it will be set-up to fail.  Promote it on all your social sites, not just Facebook, and include links back to your Facebook page or the Facebook application. Include these links on your website, in your newsletter, emails, Twitter, blog, Google+, etc., and on any printed materials such as ads, point of sale, direct mail and collateral.  Just remember that you need to include abbreviated rules on all printed pieces and communicate where the full set of rules are posted. This may also be the time to consider running some ads on Facebook to highlight the promotion. Keep them simple and include an eye-catching image.

Once your promotion is over, review all the data you’ve collected and use it to plan for your next one. One of the recommended practices I tell clients is to make sure you follow up with the winners in a timely manner and let them know how and when they will receive their prize. You don’t want a winner posting negative comments all over their social networks about a lack of communication and not getting their prize. I’ve seen that happen in cases where the promotion was a huge success up till that point.

Let me know if you if you’d like any more information on running these promotions on Facebook or other social networks. It’s hard to keep up with the rules and regulations of each platform along with new ones. Feel free to share some of your experiences here as well. What has worked for you and what hasn’t?